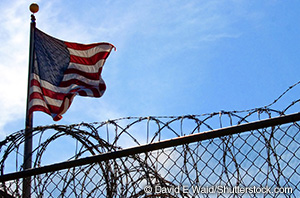 While correctional officers work to maintain order within facilities and between inmates with histories of mental illness, substance abuse, and violence, they routinely put themselves in harm's way.

Staffing shortages and officers missing work create a dangerous environment in correctional facilities. Research supported by the National Institute of Justice found that correctional agencies in many states experience chronic and severe understaffing. According to the report, officer vacancy rates in some states topped 45 percent with some states reporting up to 53 percent annual turnover in their staff.

Inmates' access to cell phones in facilities has been identified as one of the toughest issues faced by corrections officials. Smuggled in by guards or family members and activated with hard-to-trace prepaid calling plans, cell phones allow criminals and gang members to order hits, buy drugs, and plan escape attempts from behind bars.

Physical threats are an ongoing challenge for correctional officers. Inmates are creative and inventive in fashioning improvised stab weapons from everyday objects or materials – even objects as simple as toothbrushes. To ensure that correctional officers have the protection they need against these threats, the National Institute of Justice maintains the stab-resistant body armor standard to ensure officers have the appropriate protection against the knife and spike threats they encounter.

Through programs such as the Patrick Leahy Bulletproof Vest Partnership and the NIJ Standards and Conformity Assessment Program, and through electronic monitoring and other corrections technology research, the Office of Justice Programs is working to provide critical safety information and resources to corrections personnel.

Visit the following pages for resources from the Office of Justice Programs and other federal sources: