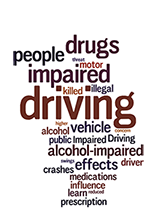 Impaired driving affects tens of thousands of Americans every year.

On average, 28 people in the United States are killed every day in motor vehicle crashes that involve an alcohol-impaired driver. That is one death every 51 minutes caused by impaired driving.

Alcohol and other drugs, when used in excess or incorrectly, impair driving by altering the brain's ability to function. Vision and depth perception become distorted, coordination is slowed, and judgment is negatively affected. Impaired driving not only puts the driver at risk, but also any passengers and others who share the road.

In many cases, the impact of impaired driving on survivors can be similar to the impact of other types of crimes, especially homicide. Impaired driving offenses often result in much lower charges and sentences – and sometimes no sanction. The survivor perceives that the offender "got away with" a serious crime.

While the issue of alcohol-impaired driving has received broad attention over the years, drug-impaired driving also contributes to fatalities and injuries from traffic crashes. Compared to alcohol, defining and identifying impairment due to drugs is more complicated due to the large number of available drugs and their unpredictable effects.

After alcohol, marijuana is the drug most often found in the blood of drivers involved in crashes. State actions to legalize the use of marijuana for medical and recreational use have furthered the concern over potential risks of driving while impaired by marijuana.

Using funding from the Office for Victims of Crime, the National Sheriffs' Association produced DUI Crashes: Real Crimes, Real Victims, a video that addresses the need for law enforcement to respond to and interact with DUI crash victims in a victim-centered way, clearly communicating services available to victims.