Justice Department Fights for the Missing 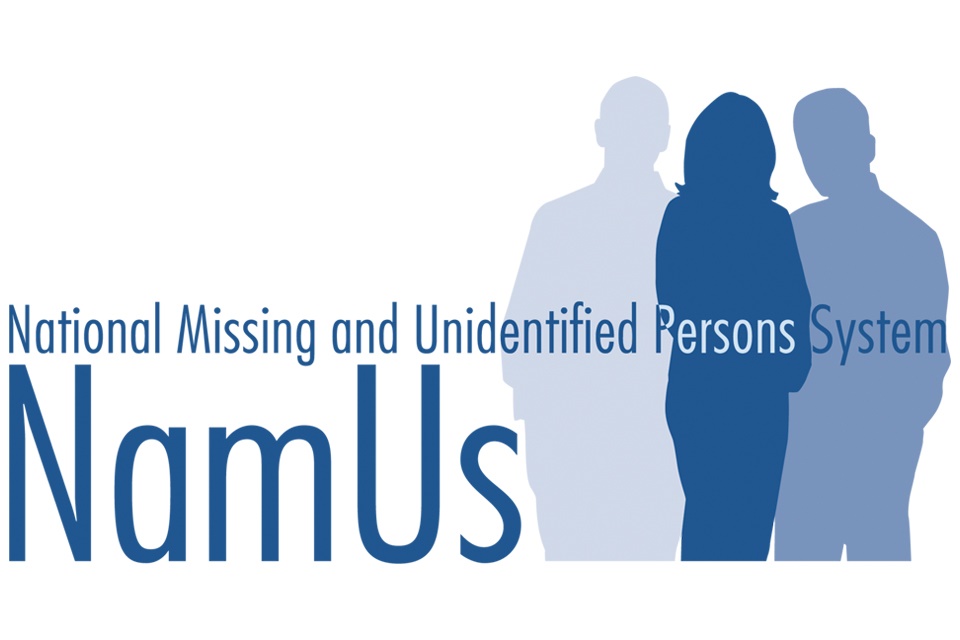 Since 2007, the U.S. Department of Justice has helped to lead the search for tens of thousands of missing Americans. Created by the Department’s National Institute of Justice (NIJ), the National Missing and Unidentified Persons System, known as NamUs, catalogs photos, fingerprints, dental records and other forensic evidence in an effort to find the missing, identify human remains and close cases that, in many instances, have been unsolved for decades.

NamUs (pronounced “Name Us”) has been a vital tool for investigators, helping to solve more than 2,700 missing persons cases and identify over 2,000 individuals from their remains, as of January 2021. It has provided long-awaited answers to families after years of uncertainty and anguish. NIJ’s commitment to this important public safety asset remains unqualified, and our investments in NamUs services continue to expand in response to a growing demand.

NIJ established NamUs to respond to the disturbing number of missing persons cases across the country, a problem that continues to plague investigators. At the end of 2019, more than 87,000 active missing persons cases were on file in the FBI’s National Crime Information Center (NCIC), a national clearinghouse of available crime data, and more than 8,100 sets of human remains had been submitted for analysis. Based on surveys of coroners and medical examiners, the latter number likely represents only a small percentage of the total unidentified decedents recovered in the United States. Data from the Bureau of Justice Statistics indicate that an estimated 4,400 unidentified human bodies are received in medical examiners' and coroners' offices in an average year. Of those, about 1,000 remain unidentified after one year.

Fourteen years ago, NIJ recognized this accumulation of unsolved cases as a national “silent mass disaster” and began laying the groundwork for a system that would allow medical examiners, coroners, police and families of the missing to submit DNA evidence, photographs and other information about victims. This repository of physical identifiers could be cross-checked by law enforcement officials to make connections to open cases involving missing persons and unidentified human remains, helping them to close investigations that had long gone cold.

A case in point is Juanita Adams, a 19-year-old Lakota woman who was last seen alive after leaving her home on South Dakota’s Pine Ridge Indian reservation in 1978. Her whereabouts remained a mystery until a tip to NamUs in 2011 suggested a link to a set of skeletal remains discovered in Georgia many years earlier. NamUs caseworkers obtained a DNA sample from Adams’ surviving sister, tested it against the remains – and the match was confirmed, more than four decades after Adams disappeared.

In Adams’ case, and in many others, NamUs matches have defied the odds, giving names to hundreds of John and Jane Does and in some cases even reuniting living relatives who had been separated for years.

Judging by the many cases that have been solved, NamUs has been a success, and that success is driving more and more users to its services. Missing persons casework submitted to NamUs has increased more than 350 percent over the last decade, rising from 10,000-plus cases in 2011 to more than 46,000 in June of 2020. The number of unidentified persons cases has more than doubled during roughly the same time period, from fewer than 9,000 to more than 18,000 cases just last year. Thousands of medical examiners, coroners, investigators and members of the public have turned to NamUs services in recent years, and their numbers continue to grow as more states require investigating agencies to submit cases to the program.

NamUs offers another important feature – accessibility to the public. In states where the NCIC is jointly managed by the FBI and authorized agencies such as local law enforcement departments, coroners and medical examiner offices, NamUs opens some of its search functions to the public and allows family members and other citizens to enter missing persons information directly. The entries are vetted through the appropriate criminal justice agencies before they are posted to the database, but the opportunity for immediate public access and input expands the system’s utility and drives even greater participation.

Since 2011, NIJ – which is part of the Justice Department’s largest grant-making component, the Office of Justice Programs – has awarded a series of grants to the University of North Texas Health Science Center to collect submissions for the NamUs database and test DNA samples on behalf of NIJ. In an effort to meet the rising demand of the last several years, NIJ has expanded its investment in NamUs, awarding the center almost $8 million in recent months to continue NamUs database and testing services and to eliminate a backlog of forensic casework accrued by the center.

Our focus is not only on meeting these immediate needs, but on securing the future of the program. Generally, federal grants are meant as short-term exercises in capacity building and not to underwrite long-term projects, certainly not on the scale of NamUs. Because the NIJ intends NamUs to last, later this year we will begin administering the program through a multi-year contract. A contract will allow us to continue the program indefinitely and give NamUs direct federal oversight, ensuring its transparency to the American taxpayer. A request for proposals to manage NamUs services closed in January 2021, and NIJ expects to award the new contract by April.

Cases involving missing and unidentified persons are among the most time- and resource-intensive matters in all of criminal justice. The Department of Justice identified a gap in addressing these cases and responded by creating NamUs, a tool that has proven itself many times over. Our commitment has not wavered, and it extends to the families of those who have gone missing as a result of criminal acts. We are working with other offices within the Office of Justice Programs to assess the needs of these crime victims and to train the law enforcement officers charged with notifying those whose loved ones have been identified.

We will make the investments necessary to ensure the continuity of this vital public safety program while allowing it to evolve in tandem with the challenges facing investigators and forensic professionals. Our partners in law enforcement demand it, and the families of the missing deserve no less.

Lucas Zarwell is Director of the Office of Investigative and Forensic Sciences in the National Institute of Justice.