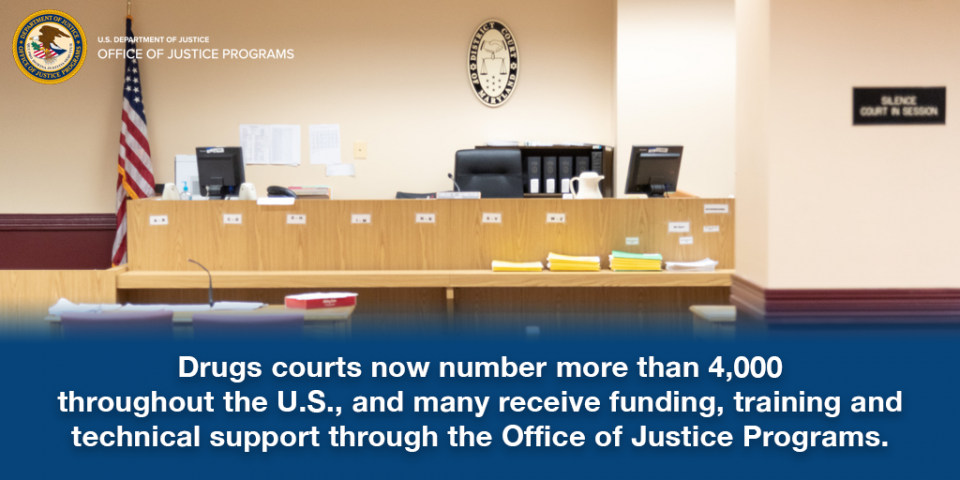 I recently spoke during the annual conference of the National Association of Drug Court Professionals.  I appreciated the opportunity to address these outstanding professionals in light of an ongoing crisis affecting our nation:  addiction and crime.

During my 11 years as a trial court judge in Colorado, I launched both a drug court and DUI court, and saw first-hand the impact they make.  Overseeing these courts remains one of the brightest highlights of my career.  They pay enormous dividends in crime reduction, lower rates of substance abuse, and cost savings.

In my court, we saw men, women and young people of all ages and walks of life whose addiction problems had brought them into contact with the justice system.  Working with my team of law enforcement and probation officers, human services professionals, counselors, and community and faith-based groups, we accepted over 150 clients in a rural community.  Our recidivism rate for each program was lower than the national average.

My multi-disciplinary team worked hard to provide the tools and skills our clients needed to remain drug-free, sober and out of the courtroom – and we expected them to work hard, too.  We demanded 365 consecutive days of sobriety and required them to get and hold a job.  We were strict but fair, clear about our expectations, and held clients accountable.  We gave our clients job training, drug treatment, counseling and a host of other services.  Most of them in turn got their life back.

Incentives were important.  Clients that fulfilled all expectations of the court were allowed to spin a popular “wheel of fortune,” and they could earn small “prizes,” such as a sobriety literature basket, affirmation cards, or a reduction in their community service.  Our goal was for them to return to their homes and communities ready to be productive citizens.  In the vast majority of cases, it worked.

Drug courts are not only a solid investment in public safety, they’re also a vehicle for personal transformation.  I’ve seen, repeatedly, men and women who’ve hit rock bottom, gripped by addiction and driven to the point of breaking the law, who were able to turn their lives around because a system that might simply have punished them, chose instead to believe in them and offer a second chance.

Several studies, including a rigorous multisite evaluation of adult drug courts funded by OJP’s National Institute of Justice, confirm the benefits.  Researchers found that these programs significantly reduce drug use and crime both during and after participation.  Drug courts have higher costs, especially in treatment services.  However, savings are greater due to fewer crimes, rearrests and incarcerations.  Drug courts saved an average of $5,680 to $6,208 per offender, maximizing the return on investment.

The first drug courts originated in the early ’90s in response to the epidemic of crack cocaine.  Their purpose is to provide treatment instead of prison time for nonviolent offenders who have been criminally charged and who have a substance use disorder.  Treating the underlying issue of addiction is proven to help keep these individuals from reoffending and recycling through the judicial system.

Drug courts now number more than 4,000 throughout the U.S., and many receive broad support through the Office of Justice Programs’ Bureau of Justice Assistance and Office of Juvenile Justice and Delinquency Prevention.  BJA collaborates with states to implement new courts where most needed, ensure that existing courts are working well, and fund treatment and recovery services, including an increased focus this year on veterans’ courts.

We need drug courts now more than ever.  America continues to be in the grip of an addiction crisis that claims tens of thousands of lives every year.  And while overall overdose deaths are on the decline, highly dangerous drugs like fentanyl and methamphetamines and of individuals who abuse at least three different substances still pose grave threats to our families and communities.

Despite the current pandemic, our grant making for drug courts and our other programs will continue this year.  I’m proud of the part I’ve played in the history of drug courts and glad to continue my involvement through OJP’s amazing work in supporting them around our country.