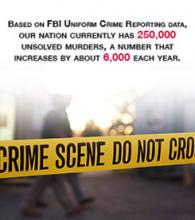 The murder of Alfred L. Barnes, an employee of Bethlehem Steel, happened on October 18, 1968, in Monroe County, Pennsylvania. Someone shot Mr. Barnes three times in the head, dumped him in a desolate pasture and stole his late-model Thunderbird.

Some 42 years later, the crime remained unsolved. Then, in August 2010, the victim's nephew, Richard Barnes, contacted police and asked them to try again to find who killed his uncle. Investigators faced a tall task trying to solve such a "cold" case—especially since the murder occurred before DNA analysis was widely available.

Then-Pennsylvania State Trooper Tom McAndrew, a detective who at the time had more than 10 years of experience in solving homicides, was part of the cold case team that pulled the files out of storage, studied them and began interviewing people associated with the case.

Those interviews eventually led to a suspect in Texas, who admitted he had taken the victim to a remote place, and robbed and killed him. Finally, after more than four decades, Richard knew what happened to his beloved uncle, and Alfred Barnes' murder became one of the oldest cold cases to be solved in Pennsylvania.

Sadly, Mr. Barnes' nephew is not alone. Nearly every community has a family who seeks a measure of closure to a missing person case, murder, sexual assault, or another unsolved crime.

The FBI Uniform Crime Report estimates that investigators were able to close only 62% of murders and only 35% of sexual assaults in 2017. And the number of unsolved violent crimes, which eventually become known as "cold cases," increases year after year.

Experts estimate that, based on UCR data, our nation currently has 250,000 unsolved murders, a number that increases by about 6,000 each year. Unsolved cases mean mounting caseloads, which drain resources and result in higher costs for agencies with limited budgets.

"Cold cases constitute a crisis situation, for all unsolved homicides potentially have offenders who have never been apprehended," says McAndrew, who served as one of 36 experts on the Cold Case Investigation Working Group, convened by the Office of Justice Programs' National Institute of Justice. "History and research show that a violent offender will likely repeat."

The working group, consisting of experts in a wide range of aspects of cold-case investigations, developed recommendations for law enforcement and published National Best Practices for Implementing and Sustaining a Cold Case Investigation Unit, or for short, Cold Case Best Practices.

The working group's chief recommendation is that law enforcement agencies form dedicated cold-case units. (OJP's Bureau of Justice Assistance provides grant funding through two programs that may be available for jurisdictions to use in developing a cold case unit. These are the Edward Byrne Memorial Justice Assistance Grant Program and the National Sexual Assault Kit Initiative.)

"It's important to convince politicians that these cases can be solved with funding for additional staff workers in cold case units," McAndrew said.

Cities like Washington, DC, have shown it pays to focus on cold cases.

Within five years of creating a cold case squad, investigators from the Metropolitan Police Department of the District of Columbia had closed 160 homicides. The squad continues its dedicated work to this day.

Many more police departments can follow suit. According to 2016 data from OJP's Bureau of Justice Statistics, the U.S. has nearly 18,000 law enforcement agencies; but, according to NIJ-sponsored research, only 7% have dedicated cold case units.

"Going back to 1980, there are hundreds of thousands of unsolved cases nationally, and the numbers are going up," McAndrew says. "How can you not address that?"