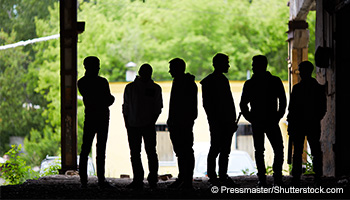 Street gangs have posed a significant threat to public safety in the United States for decades.

In many communities that experience high rates of crime, public safety agencies struggle to respond to gang-related crime due to strained resources. Young and vulnerable populations in these communities are then at-risk because they are targeted by gangs as potential new members or as victims.

Gangs are defined in many ways, but most definitions have similar components. A common definition of a gang is a group of three or more individuals who engage in criminal activity and identify themselves with a common name or sign.

Gang membership brings with it a host of negative consequences that disrupt the normal course of youth development. This includes skipping school, failing to graduate, becoming a teen parent, and unemployment, among others.

Although youth are generally only gang members for a year or two, the negative impact of their exposure can last well into adulthood. During their late twenties and early thirties, gang members are prone to increased economic hardship and family problems, poorer physical and mental health, substance abuse, and continued involvement in crime.

While the dangers of gangs for youth are startling, students throughout the country have reported less gang activity in their schools, according to the 2018 Indicators of School Crime and Safety report.

The percentage of public schools that reported gang activities at all during the school year was lower in 2015-16 (10 percent) than in every prior survey year for which data is available. Between 2001 and 2017, the percentage of students age 12-18 reporting gang activity dropped from 20 to 9 percent, a trend that was seen in urban, suburban, and rural areas.

Addressing any gang issues in the school environment requires the involvement of law enforcement, school administrators and staff, and other key sectors of the community. The OJJDP Comprehensive Gang Model highlights such a holistic approach by coordinating the roles of all agencies and organizations within a community that are responsible for addressing gang-related crime and violence.

In prisons throughout the country, gangs are responsible for a disproportionate amount of misconduct and violence. Their presence and actions challenge ongoing efforts to maintain control, order, and safety. Many U.S. prison systems have cited restrictive housing as a successful way to reduce gang violence, but it's one of the most controversial correctional practices because it places gang affiliates in restrictive housing, not always because they've earned it or needed it.

Overall, gang members engage in a higher level of serious and violent crime than their non-gang-involved peers. Research about gangs is often intertwined with research about gun violence and drug crime. It's clear that gangs, guns, drugs, and violence are interconnected.

NIJ-funded evaluations of gang prevention programs have identified key factors in designing and implementing positive interventions to reduce gang membership and gang violence. These factors include:

Visit the following pages for additional information and resources from OJP and other federal sources: