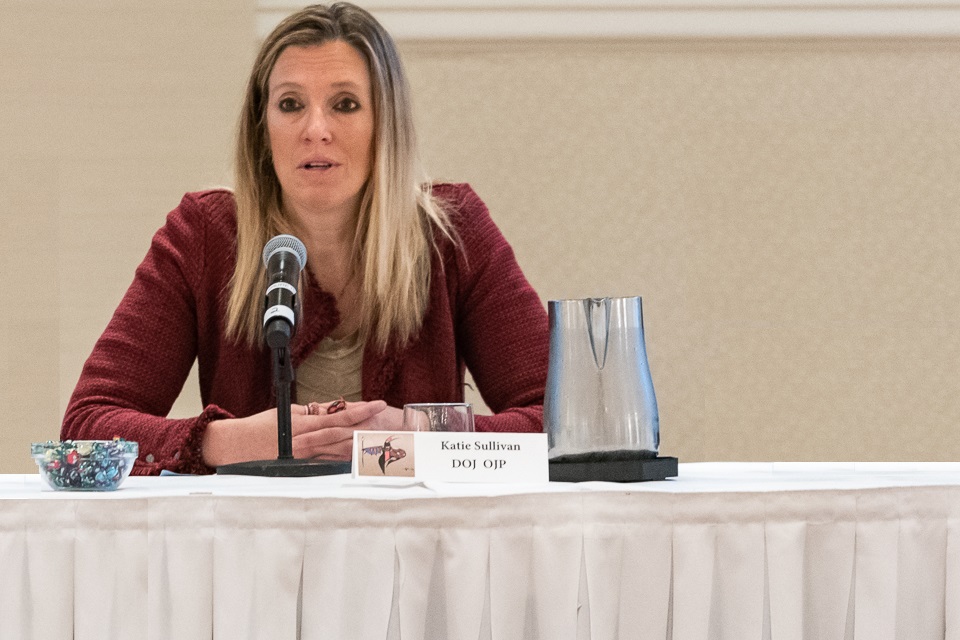 In my work with the Department of Justice, I have heard far too many tragic stories of heartache and loss.  That is why I feel privileged to serve as Attorney General Barr’s designee as co-chair of an important interagency effort:  the Presidential Task Force on Missing and Murdered American Indians and Alaska Natives, or Operation Lady Justice.  Established by President Trump’s Executive Order 13898, Attorney General Barr co-chairs with Department of Interior Secretary Bernhardt, represented by Assistant Secretary Tara Sweeney the task force, which also includes representatives from the Justice Department, the Department of the Interior and the Department of Health and Human Services, and is charged with developing an aggressive, government-wide strategy to address this complex and critical problem.

Our American Indian and Alaskan Native partners struggle with many  challenges, stemming from geographic realities, poverty and substance abuse issues. By one estimate, one-third of Alaskan villages have no local law enforcement, and only one state trooper is responsible for serving every one-thousand square miles in our largest state. These experiences have underscored the need for greater public safety—and justice—for our nation’s native people, both in tribal villages and urban settings.

American Indians and Alaska Natives suffer disproportionate rates of violence.  According to a key 2016 study funded by the National Institute of Justice, four out of five adults have experienced violence from an intimate partner. Hundreds of Native Americans have simply vanished, leaving no clues as to what happened—whether an accident, foul play or a decision to flee. Unsolved murders and cold cases are a large problem. Many factors complicate investigating and solving these cases, including a shortage of on-the-ground law enforcement to cover what is often remote and rugged terrain; the absence of consistent, thorough reporting systems;; deficits in training, forensic equipment and investigative personnel, technology and infrastructure; and tangled jurisdictional boundaries.

The task force is implementing strategies to tackle these problems. First, it is holding listening sessions and consultations with tribal governments and community members across the country to learn of their challenges and needs, as well as their successes. Second, the task force is working to strengthen law enforcement and investigative procedures for new and unsolved cases, and will appoint a team to review cold cases from Indian country. Third, the task force will develop protocols and more clearly define the roles of tribal, local, state and federal authorities and jurisdictions.

The Presidential Task Force is developing a plan to collect and analyze data. Until now, the lack of solid numbers and other data for the missing or murdered hampers efforts to deal with cases.  The task force will also examine other factors that may underlie missing cases, such as  domestic violence, exploitation and addiction. These data can help strengthen tribal, federal and state responses and prevention strategies.

The violence and suffering leaves traumatic and lasting impacts on individuals, families and communities.  The Presidential Task Force on Missing and Murdered American Indians and Alaska Natives will help bring home the missing, hold the guilty accountable, and deliver justice for victims and survivors.