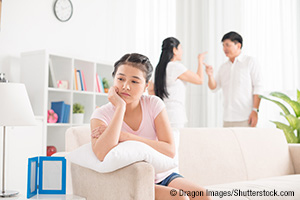 Family violence covers a broad range of acts that can include emotional, financial, physical, and sexual abuse. Not only does it harm the victim, but family violence presents dangers for immediate family members as well.

Domestic violence, also referred to as intimate partner violence, is a significant public health problem with adverse physical and mental health consequences for both adults and children exposed to it. Unlike most other crimes, domestic violence is not usually a sudden, isolated, or unexpected incident. It may involve years of emotional and psychological trauma, as well as physical injuries that may become increasingly more severe and occur more frequently over time.

Research supported by the National Institute of Justice has shown that children exposed to domestic violence and parent-to-child aggression are at risk of antisocial behavior and involvement in the criminal justice system as an adult.

Overall, exposure to violence at a young age can harm a child’s emotional, psychological, and even physical development. Children exposed to violence are more likely to have difficulty in school, abuse drugs or alcohol, act aggressively, and suffer from depression.

According to results from the National Crime Victimization Survey, there were nearly 1.2 million domestic-violence victimizations in 2019. This includes the subset of violent victimizations that were committed by intimate partners or family members.

Unfortunately, many victims of domestic violence do not see themselves as victims and do not realize domestic violence is a crime perpetrated against many others too. Successful efforts to assist victims often focus on improving access to community resources and creating a protective mechanism to minimize further abuse and help victims escape violent situations.

Supported by the Office for Victims of Crime, the National Domestic Violence Hotline is available 24 hours a day/7 days a week for victims experiencing domestic violence, seeking resources and information, or questioning unhealthy aspects of their relationship.

To help identify what has been shown to be successful or promising in addressing family violence, the CrimeSolutions website contains reviews and ratings of a variety of programs and practices that aim to prevent family violence, help victims, and reduce the impact to those who witness such violence.

Visit the following pages for information and resources from the Office of Justice Programs and other federal sources related to understanding, preventing, and responding to family violence: