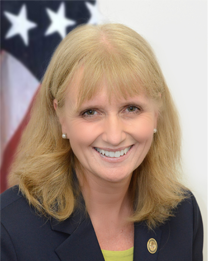 Former Administrator of the Office of Juvenile Justice and Delinquency Prevention

Caren Harp was sworn in as Administrator of the Office of Juvenile Justice and Delinquency Prevention on January 19, 2018.

Ms. Harp is a former director of the National Juvenile Justice Prosecution Center at the American Prosecutors Research Institute. She also served as Chief of the Sex Crimes Prosecution Unit in the Family Court Division of the New York City Law Department.  Ms. Harp was a member of the American Bar Association's Juvenile Justice Standards Task Force and the National Steering Committee of the Office for Victims of Crime-sponsored Vision 21 Project of the National Council of Juvenile and Family Court Judges.

During her 23-year career as a trial lawyer, Ms. Harp spent 20 years on the prosecution side of the court system, either prosecuting cases or training prosecutors, and 3 years as a public defender.  As a deputy prosecutor, Ms. Harp tried a wide range of cases in criminal and juvenile court, including sexual assault, domestic violence, and capital murder.  As a trial attorney for the Arkansas Public Defender Commission, she represented indigent defendants charged with major felonies, including capital murder, and managed attorney caseloads and court coverage in six counties.

Prior to being appointed Administrator, Ms. Harp served for 5 years as an associate professor of law at the Liberty University School of Law where she taught courses on children and the law, evidence, professional responsibility, and trial advocacy.