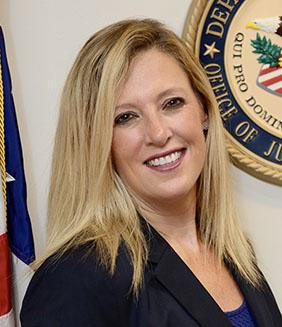 Katharine (Katie) Sullivan was appointed by Attorney General William Barr as Principal Deputy Assistant Attorney General of the Office of Justice Programs in June 2019.  She leads the Department of Justice's principal funding, research and statistical component, overseeing more than $5 billion in grants and other resources to support state, local and tribal criminal and juvenile justice activities and victim services.

Katie previously served on the White House Domestic Policy Council, and as Acting Director of the Justice Department's Office on Violence Against Women where she directed grants, training and other activities that reduce and respond to domestic violence, dating violence, sexual assault and stalking.

Before joining the Department of Justice, Katie served as a Colorado state trial court judge in the state's 5th judicial district, where she presided over misdemeanor, felony and civil matters including domestic violence cases, sexual assault sentencings and cases involving drugs and alcohol.  She heard 45,000 cases during her 11 years on the bench and also implemented and presided over a drug court and a driving under the influence (DUI) court.

Prior to becoming a judge, Katie served as a Deputy District Attorney in Colorado, prosecuting both felony and misdemeanor cases.  She worked closely with law enforcement and participated in a community-based collaborative domestic violence task force.

Earlier in her career, Katie spent time in private practice, serving as a member of Colorado's Victim Compensation Board where she trained law enforcement officials across the nation on risk and liability in jails and prisons.  She also served on the State Judicial Ethics Board.

Katie received her undergraduate degree from Syracuse University and graduated from George Washington School of Law.