An unexpected hero who stopped a shooter in a diner, a lawyer dedicated to delivering services to victims in remote Indian County, a mother who lost her 18-year-old daughter to murder. 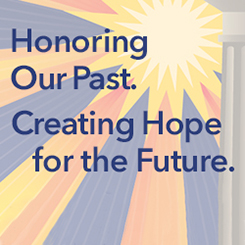 These are three of the 12 extraordinary individuals and one team honored during the annual ceremony for the National Crime Victims' Service Awards, which took place in Washington, DC, April 12. The Department of Justice and the Office of Justice Programs sponsored the event.

"This week the men and women of the Department recommit ourselves once again to ensuring that crime victims continue to have a voice in our legal system, to securing justice for them, and to preventing other Americans from suffering what they have endured," said Attorney General William P. Barr.

The ceremony was part of the annual commemoration of National Crime Victims' Rights Week, April 7-13, which was organized by OJP's Office for Victims of Crime. Deputy Attorney General Rod Rosenstein and OJP's Principal Deputy Assistant Attorney General Matt M. Dummermuth provided remarks. The theme of this year's observance was "Honoring Our Past. Creating Hope for the Future."

"Almost 50 years ago, a grassroots movement rose up to support crime victims and survivors," said Mr. Dummermuth. "Today, that movement has grown into a nationwide effort that reaches victims in every corner of our country."

For decades, Mr. Meese ensured that the criminal justice and public policy communities heard the voices of crime victims, and worked to secure vital services and funding. As counselor to President Ronald Reagan, he played an instrumental role in the President's Task Force on Victims of Crime in 1982 and the effort to pass the Victims of Crime Act two years later. President Ronald Reagan appointed Mr. Meese as the 75th U.S. Attorney General in 1985.

Allied Professional Award, to Ms. Diana Faugno, a forensics nurse, pioneer for victims' rights and one of the strongest medical advocates for sexual assault survivors. A trailblazer for best practices, she has conducted more than 5,000 forensic exams and serves as a role model for new nurses in this field. And to Sergeant Amy Dudewicz of the Crimes Against Children and Special Victim units of the Bernalillo County, New Mexico, Sheriff's Department. Sergeant Dudewicz has been instrumental in implementing an innovative program that prevents crimes against vulnerable children. Through Operation Safe Child, in partnership with other state and county agencies and nonprofits, detectives help high-risk families access critical services. The program works through about 150 referrals per month.

Award for Professional Innovation in Victim Services, to Mr. Richard H. Norcross III, a former detective who nearly lost his life in an attack. His injury ended his tenure as a detective, and he moved to the prosecutor's office, where he helped create a portal that revolutionized communications between prosecutors' offices and crime victims. Mr. Norcross also provides important service in crisis intervention and trauma recovery for police and crime victims.

Crime Victims' Rights Award, to Ms. Susan Howley, who has been a visionary legal and public policy advocate for nearly three decades. She currently advocates for the integration of victim research and practice to strengthen victims' rights nationwide. Among her many accomplishments are expanding training for State Victim Assistance Academy leaders; spearheading VictimLaw.org, a publicly available online database of crime victims' rights laws; and creating a toolkit for victim restitution collection. Her tireless efforts have made our nation's victim services stronger than ever.

National Crime Victim Service Award, to Mark Weiner, who during his nearly 30-year career as a victim advocate has been at the side of police officers as they respond to violent crime. Working at the local, state and national levels, he has diligently worked to ensure those affected receive immediate, compassionate service and psychological first aid to mitigate their trauma. And to Ms. Eva Velasquez, who educates the public and develops innovative solutions to reach those most affected by identity theft, such as youth in the foster care system. She co-founded a campaign to more effectively support these youth as they leave foster care, and brought this important issue to the attention of members of Congress.

Ronald Wilson Reagan Public Policy Award, to Ms. Missey Smith, who endured the murder of her 18-year-old daughter. She used this experience to help pass laws in 23 states that enable police officers to have access to cell phone signals as they search for and rescue victims. And to Ms. Hallie Bongar White, who, to deliver services to victims in Indian country, created a program to train local women to provide emergency first aid and collect forensic evidence for sexual assaults, as well as an intensive online program that prepares graduates to represent victims in tribal court hearings for domestic violence protection.

Special Courage Award, to Mr. James Shaw, Jr., who rushed a gunman and wrestled his weapon away. Although the shooter killed four people in a restaurant, Mr. Shaw's courageous actions saved the lives of many others. He visited the wounded in the hospital and established a GoFundMe account for the victims' families, which raised more than $225,000 in donations. And to Ms. Shari Kastein, who suffered domestic abuse and fled with her 15-month-old daughter. During a period of homelessness following her abuse, her little girl was raped and tortured. Kastein overcame the horrific effects of these crimes and, for 34 years, has used these experiences to bring comfort and healing to thousands of victims.

Volunteer for Victims Award, to Ms. Laura Abbott, who survived a near-deadly domestic assault to become an outstanding advocate for other victims at the legislative and grassroots levels. She speaks about victims' rights to groups across Arkansas and is working for passage of a state constitutional amendment for victims' rights.