While both men and women can be victims of stalking, women are stalked at a rate three times higher than men. According to the 2015 National Intimate Partner and Sexual Violence Survey (NISVS), approximately 1 in 6 women (16 percent) and 1 in 17 men (5.8 percent) experienced stalking at some point in their lifetime. Approximately 6.5 million men and women were stalked in the 12 months prior to the survey. 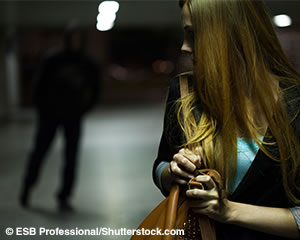 Victims suffer from a wide range of negative effects. The prevalence of anxiety, insomnia, social dysfunction, and severe depression has been shown to be much higher among stalking victims than the general population, especially if the stalking involves being followed or having one's property destroyed.

Stalkers vary considerably in the types and frequency of stalking tactics, but in most instances, the stalker is a current or former intimate partner. Physical surveillance is often the most frequently cited tactic, followed by phone calls, and then by other unwanted contact.

Most offenders use multiple means of approach and exploit a variety of technology. Often these technologies are used without the victim's awareness.

Stalking is unpredictable and dangerous. No two situations are alike. If you believe you're a victim of stalking, trust your instincts and don't downplay the danger. Take threats seriously and if you feel you are unsafe, you probably are.

All 50 states have stalking laws, but statutes and definitions of stalking and related crimes vary from state to state. For example, state laws vary regarding the element of victim fear and emotional distress, as well as the requisite intent of the stalker.