To the general public, thoughts on school safety are often shaped by high-profile school shootings and other tragic incidents that dominate a news cycle. For educators, however, issues such as bullying, harassment, and school discipline policies are at the forefront of their thoughts and can affect school safety on a daily basis. 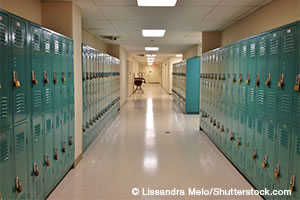 Overall, data suggest that school crime rates have dropped nationwide since the early 1990s. Between 2001 and 2017, the overall percentage of students ages 12–18 who reported being victimized at school during the previous 6 months decreased (from 6 to 2 percent).

Since the Columbine High School shooting in 1999, school security measures have increased with nearly 100 percent of schools serving 12- to 18-year-olds using at least one safety or security measure. This includes locked doors, security cameras, hallway supervision, controlled building access, metal detectors, and locker checks. However, the use of these safety measures varies by school population and location.

Launched in 2020, SchoolSafety.gov offers schools and districts actionable recommendations to create a safe and supportive learning environment where students can thrive and grow. The site covers critical areas of interest, including mental health, emergency planning, bullying, and more.

Bullying is a significant problem nationally and internationally. In 2017, about 20 percent of students in the United States ages 12-18 reported being bullied at school during the school year, according to the 2018 Indicators of School Crime and Safety Report. More girls (24 percent) reported being a victim of bullying than did boys (17 percent).

Being either a bully or a victim of bullying can put youth at-risk for contact with the justice system and for developing other problem behaviors. A Model Programs Implementation Guide from the Office of Juvenile Justice and Delinquency Prevention outlines 10 steps educators can take in implementing school-based bullying prevention programs. A complex issue, bullying is unique to each school and community. Understanding what specifically drives bullying in a community is critical to creating a successful prevention program.

To learn more, visit the following pages for information and resources produced or sponsored by the Office of Justice Programs and other federal sources: